Before we embark on the penultimate chapter, may I advise that we had some breaking news this afternoon. If you didn’t get this news, you can read it here.

In reply to my ‘heads up’ email to Sean in which I warned him about the Larry O’Driscoll (LOD) scumbag, he sent me an email asking me to make the assets available immediately, stating that LOD had his authorisation to collect them. I advised Sean that I would not be handing over the assets under any circumstances, as the transfer of the business of OnlineGrinds.ie to his company was illegal. He replied saying that if I didn’t hand over the assets, he would purchase new equipment and make me pay the replacement costs. Yet another idle threat. Sean had cried wolf once or twice too many for me to believe him this time.

Whether it happened with the assets I had, or the new ones Sean would purchase, Sean & Co. were adamant to truck on with Ashfield, less little Paulie Waulie. A different shareholding structure was now in place. I am unsure how Ashfield College fitted into this new structure, but I am sure of one thing; my company, in fact, my two companies, were gone. I didn’t receive a cent payment, neither for founding the company, nor for all the hard work I had put in over the past 3 years to bring the company to the position it was in. A position good enough to do a deal with Ashfield College.

Such was the impact OnlineGrinds.ie had on the grinds industry, and on the media in general. Ashfield was one of the most well-known traditional grind schools in Ireland. It was voted the best grind school in the country last year. I have first hand experience of how good it is, as I went to Ashfield myself to repeat my Leaving Cert. Notwithstanding the fact that I got 5 points less second time round (290 in Ashfield 1999, 295 in Mary’s 1998), I still got my second honour which got me into the Shannon College of Hotel Management. For this, Ashfield, I am eternally grateful.

In many ways I feel sorry for Ashfield for getting involved with Sean & Co. Little did they know what they were getting themselves into. I guess the picture we (Aine and I) painted of OnlineGrinds.ie in the media over the past few years would have made them believe that it had real potential to succeed. I am sure they assumed (again given the media coverage) that our tech team was up to it, and that our website was state of the art. They probably even bought into the vintage website look.

Sean & Co. would have backed up this confidence during their talks with the college. I have no doubt that they told Ashfield that the live grinds worked really well, that there were never any tech issues, and that online grinds is a great alternative to traditional grinds. And why would they say anything else? Maybe if they had actually been present for a live broadcast from start to finish, they might have realised otherwise.

A number of weeks went by and there was no movement on the OnlineGrinds.ie site, not even a mention of live grinds. As you can imagine, I kept a very keen eye on its progress. Suddenly, just before Easter, there was an announcement that they would be running Easter Revision Courses. But wait for it, the price would be €75 per subject. Yes, you read correctly, seventy fucking five. This would be a justifiable price to pay if Karla was doing the Biology grinds, but seeing as she was a hoax, this was a laughable price to pay.

One of my objectives of starting OnlineGrinds.ie was to provide a low cost alternative to traditional grinds. Making grinds more accessible for those currently doing them (Chloe and Greg) and more affordable for those who could never afford them in the first place (Stacey and Jason). We were going to charge a maximum of €10 per live class, where you could ask the teacher questions and download and print their excellent quality notes. Opting for a monthly subscription would make the live classes even better value. This model obviously didn’t bear fruit, but it did result in one hell of a bonfire in Ballymun.

As we lost rather than made money with this model, my thinking changed throughout the course of the project. We could not charge for grinds if there were so many tech issues. The only way forward for OnlineGrinds.ie was to provide the grinds for free, and to make money with advertising. But of course when I proposed the idea of a freemium model to the guys, it was duly ignored and the focus was shifted on my involvement with Learnology, rather than on the progression of OnlineGrinds.ie. Coincidentally, a number of months later, an education giant called Alison.com entered the market doing online grinds for free. If only they had listened to me and not acted the prick, says you. I wonder who would win a web development contest between the might of Alison.com vs. the ability of BS? Hmmmmmm. Rhetorical question if there ever was one.

Despite the fact that our €10 model didn’t work, and that I had proposed going down the freemium route, they made the courses €75 per subject. I know I am a fuckin eejit and all, so my opinion probably doesn’t count, but can you see any logic at all in this price? €75 would be eminently acceptable if Karla and her boyfriend were going to demonstrate the ‘ins and outs’ of the human reproductive system on camera, but it would represent very bad value for money if the actual, real-life, questionably average looking Biology teacher was simply going to knock one out (a class that is) on her own.

So, having learnt of the exorbitant Easter Revision courses, I kept a daily, close eye on the number of registrations on the site. You could see this number very easily. Every time a new member joined the site, this person would automatically become a member of the forum, and you could see the number of forum members (rise or fall) at the bottom of the page. Despite the amount of money the lads (the dwarves) seemed to be putting into radio ad campaigns on the likes of 4FM (fucking into the bonfire), registration numbers grew in single figures on a daily basis. Nothing had changed at all.

The Easter revision courses were going to be six hours long (yes, I said six). Doing one hour long classes presented enough technical challenges for me to have no finger nails remaining, never mind six hour classes. But that’s probably because I am not a techie and was left to fend for myself in the tech department during every broadcast we did. I often wondered would BS spend any time in the studio now that they were doing six hour courses with Ashfield. A pig just flew over my head.

The six hour Easter revision courses kicked off and while the messages on their Facebook page were full of hope, the student registration numbers were full of despair. I thought to myself: ‘these guys are never going to learn’. 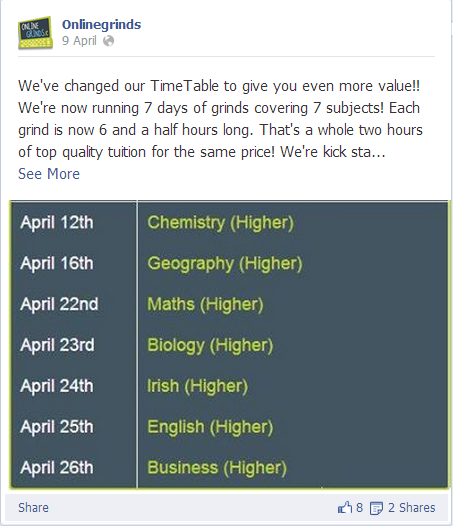 Easter came and went and I had no idea how the courses went for the guys. There was a small part of me actually wishing them well. That is until mental images of BS came into my mind. Whenever that happened I would wish them a slow and painful death. The thing is that the teachers delivering these courses were probably some of the best in the country. This had the potential to really work. They needed to get the business model right (freemium) and get BS the hell out of there. No point in having the best teachers in the country if BS was in charge of IT. It’s just not right. It’s like having a Ferrari but only being able to drive it down a boreen (not sure if that’s spelled correctly; I mean a tiny country road with grass in the centre and cow shit everywhere).

The Easter Revision courses ended and there was little activity on the website front for weeks. The Easter Revision wording remained on the homepage for weeks, then months. Indeed, it’s still there, and it’s now July. The days are getting shorter; it will soon be Christmas, and the wording remains. I’d say at this stage he’s leaving it there until next Easter, to save him the work of typing the words ‘Easter’ and ‘Revision’ all over again. There’s a multitude of countries that could be explored in the time it would take him to do this.

Sometime in early May there was a rather timid and meek announcement on the OnlineGrinds.ie Facebook page about Leaving and Junior Cert final revision courses. I don’t think the announcement on Facebook got any likes or shares, not even by the OnlineGrinds.ie staff themselves. The website text about the course was nearly as long as this blog. It mentioned how the maths classes would be free to all (HURRAY, SENSE AT LAST!) and that the rest of the courses would only be €30 each. A friend of mine summed it up beautifully in one sentence “they clearly didn’t make a penny over Easter”. 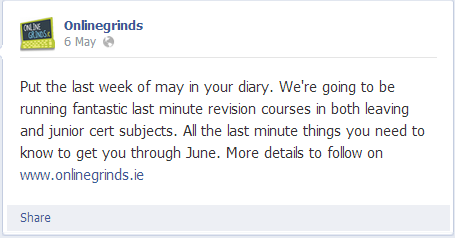 I have never seen website wording as apologetic as I did on the homepage in relation to the final revision courses. It was as if OnlineGrinds.ie were indebted to the students in some strange way. The wording was pretty desperate. It went a bit like “if you are not sure that this will help you, try it for free” whereas it should have read “to see why this is the most awesome alternative to traditional grinds, we are giving you a free sneaky peak”. But then again, all the content was coming from BS, and he is no more a marketer than he is a web developer (SL).

The page told you what you’d get if you paid €30. You’d get so much of this, so much of that and so much of the other “for ONLY €30 – it’s a STEAL!” If this didn’t make you wonder “what’s wrong with this service that they have to give away everything so cheaply?” I don’t know what would.

Despite the fact that the lads were virtually paying the students to register on the site, the uptake didn’t seem significant. Single figures increases on a daily basis.

Low on behold on the 24th May 2014, two days before the course was due to start, and a week before the Leaving and Junior Cert exams began, the following announcement was made on their Facebook page:

If you read into things as deeply as I do (I am the world’s worst for that), would you not wonder why they hadn’t said anything about what was going to happen to students who had already paid? Something along the lines of “we will make full refunds to all students who have already signed up for this course”. Could it be because not one person had actually paid?

The guys cancelled the revision course for one of two reasons, both as plausible as each other: (a) nobody at all signed up for the course or (b) the tech issues were too great to warrant running the courses.

Either way, no final revision for students. Nothing. Zilch. Nada. 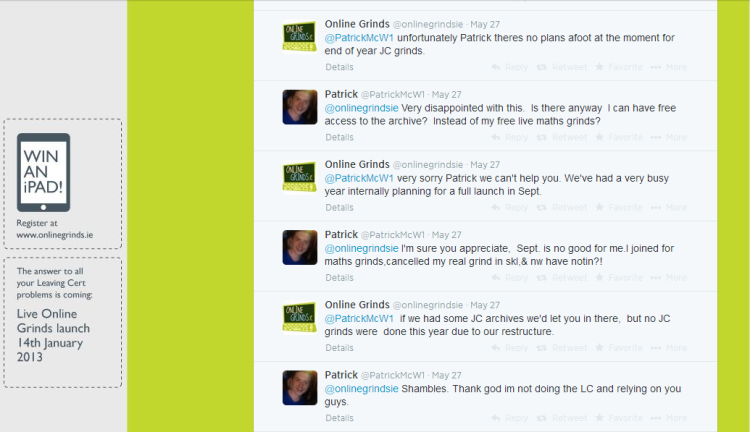 It looked like BS was telling the truth when he said he was very busy all year. So busy that he forgot to change the Twitter wallpaper on the left, which was out of date……….by 16 months.

Next Chapter – Chapter 22: Lessons Learnt, Why The Fuck Did I Write This Blog and What’s Next For Paulie Waulie 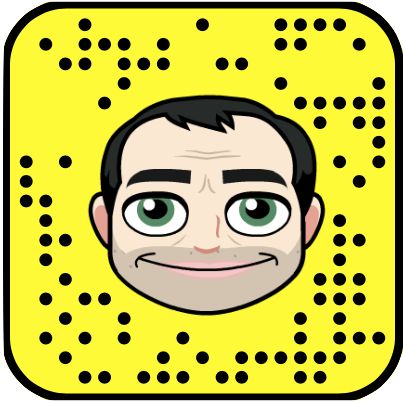